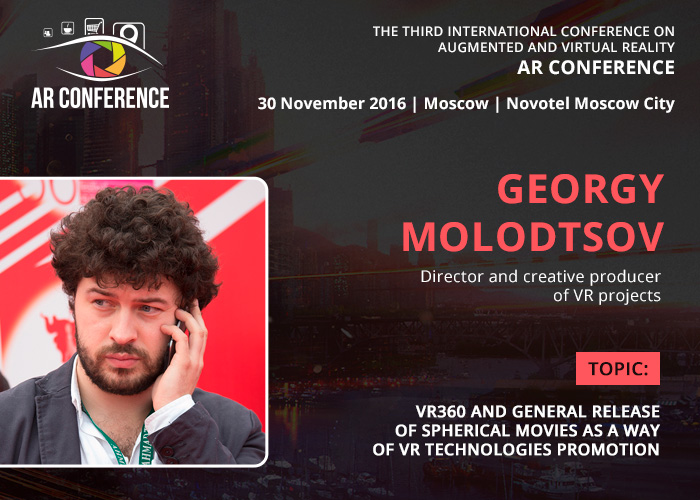 On November 30, during the AR Conference there will be a report of Georgy Molodtsov – director and creative producer of VR projects. The speaker is well-known due to the use of VR technology for the development of cinematography and implementation of social projects.

He has created the first Russian project with virtual reality in order to motivate disabled people to be more active in real life – VRability.

In addition, within the two years Georgy Molodtsov was involved in organization of several large VR movie festivals. He was a programing director of EMC VR Film Festival, co-organizer of spherical movies exhibition in Sweden and Belarus, as well as a creative director of Mixar VR Film Festival. Georgy is a permanent member, as well as vice-president of the Documentary Film and Television Guild official portal.

Topic of his report: “VR360 and general release of spherical movies as a way of VR technologies promotion”.

“Large European film festivals include VR movies and VR installations into their programs. The reason for that is the possibility to use different types of film narration and language”, said Georgy Molodtsov.

“It opens a new level of thinking, when you communicate with the audience, trying to guess which angle of view they will choose. Such a film is not just a monologue of the director telling the story, but also a necessity to enter into a dialogue with potential audience. Thanks to the panoramic view, a person chooses what to watch, complicating the director’s task and laying greater responsibility as well.”

Visit AR Conference on November 30, 2016 in order to learn about the prospects of VR in Russian and global movie-making. Registration is open on the official website.