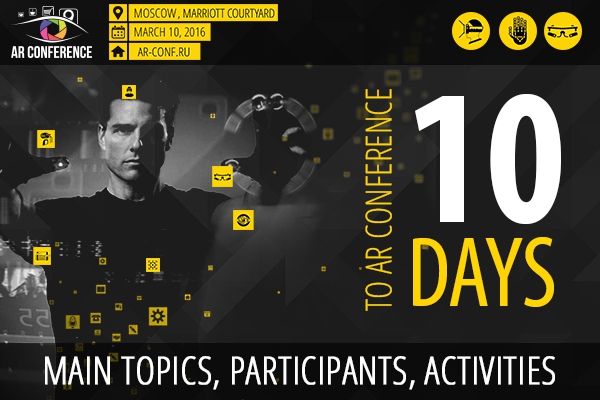 March 10, 2016 Moscow will host an international conference on augmented and virtual reality technologies AR Conference. Within the event there will be two panel discussions. Leading experts will discuss the development of AR and VR technologies. Market leaders will report on the issue as well. Within the Conference an exhibition of industry achievements and a unique interactive quest will be held.

Participants will discuss investing in start-ups and ways to support existing AR/VR technologies in Russia. They will raise the question of poor awareness of market participants as of the technology, determine possible solutions to the problem, tell about the right marketing and pricing in the industry.

They will discuss the difference between the development of virtual reality for mobile gadgets and PC, highlight the key difficulties for VR developers and ways to overcome them, talk about where to start while conquering the VR market and where to find money for this and tell you how to integrate payments into VR games. Particular attention will be paid to shops, specializing in virtual reality, and products to count on (VR games or VR infrastructure).

Reports of the Conference:

- Holograms as a tool for blurring the limits of reality (Dmitriy Soshnikov, Microsoft).
- VR headset as a platform for taxitainment (Daria Zolotukhina, Yandex.Taxi).
- How to use VR applications in tourism, museums, automobile brands and construction? (Maxim Kozlov, Interactive Lab).
- Open Source software for augmented reality (Ben Vaughan, Daqri).
- Prospects of the development and application of VR technologies by OOT services (Victor Chekanov, Megogo).

Demo zone of the event will host an open demonstration of advanced devices capabilities.

Guests of AR Conference will see:

Guests will have an opportunity to take part in the test drive of sensational gadgets: Google Cardboard, Samsung GearVR, Oculus Rift, Fibrum. Everyone will be able to join an interactive quest, plunge into the world of amazing adventures and experience possibilities of Cyball-VR advanced technologies.

AR Conference program is designed both for participants of AR/VR market and everyone interested in the technologies of the future.