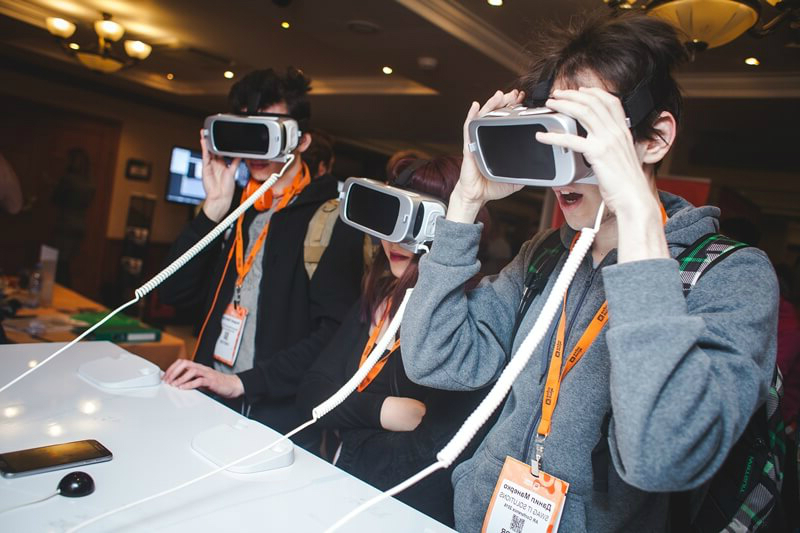 The latest development of DEUS opens the verge of virtual reality which you could only dream of. An exclusive Project TAVRUS VR helmet provides a 150° view angle projecting the image directly on the peripheral region of vision. You are plunging into the chosen world deeper than ever. Despite the additional features, the helmet remains compact and easy to use.

Try it yourself - this cannot be missed! Now you can test the latest device, as well as the company's previously presented developments, including Odin DK, on an interactive virtual reality seat.

Explore new depths of the VR!

Senso develops technology for hands & body tracking in Virtual Reality and providing haptic feedback. Senso Glove and Senso Suit provide the most natural way of interacting with Virtual Reality - by your own hands. This gives you much deeper level of immersion into VR: you not only can see your hands in VR, but also feel them!

We are presenting two of our products at the AR/VR/MR event: Senso Glove DK2 - the first VR gloves combining inertial tracking together with external optical tracking. This approach results in very high tracking precision and absolutely no "blind" zones or "drifting". This is the second version of our VR Gloves. The second product - Senso Suit - is a set of on-body modules, which provide full-body tracking and haptic feedback. Both of the products are wireless and come with open-source SDK for Unreal Engine and Unity.

VR2GO booth will allow learning about one of the application areas of VR technologies for solving marketing tasks.

VR2GO developed a VR game for one of the large Russian companies. The game became a part of the massive BTL action. The action lasted for 21 days last summer in the Gorky Park. Participants of the action were offered to play one of the three mini-games in HTC-VIVE headsets and to fight for real prizes. We offer participants of AR/VR/MR Conference to transfer to a virtual stadium, go through sporting trials and evaluate the potential of new tools offered by VR for the marketing of the future.

At the VR quest №1 stand, attendees would be able to discover the team play in the virtual reality, focused on the quest business model, together with a VR quest titled “Minority Report”.

Team VR quests are the new unconventional format of already popular classic real quests. Our games highlight the new technologies in the context of cooperative pastime.

This kind of activity lets the user sit and enjoy the manual control of the objects using just hands.

Homido is a French company developing hardware and software solutions on the mobile virtual reality market. It has an office in Russia. The company has a wide variety of VR headsets: Homido V1, Homido Grab, Homido V2 and Homido Mini. Moreover, the company launched an app Homido Center offering users the best content for VR headsets produced by the French brand.

Homido is a Chinese and French enterprise consisting of experienced professionals in such spheres as 3D movie, VR, development of mobile apps, design and manufacturing. Homido also has its center of production located in the Shanghai area, China. While the French office is responsible for product development, hardware is produced in China. The process of creating VR headsets is under control, thus ensuring high quality and reliability of products.

parts of VRHOUSE products fully imitate the whole film renting system in virtual reality, using wireless systems on the most low-budget equipment – Android mobile. The VRHOUSE solution will allow to demonstrate products for up to 10 hours without a server, wires, and chargers.

A VR analogue of RENTRACK, an international real viewing tracking system, deserves special attention of both the audience and industry professionals. Currently, this module is the first and only way to return means in the B2C category.

Today Fibrum is focused on creating top quality mobile VR-apps. Fibrum is constantly producing new content that is available on popular operating systems.(Android and iOS) Right now, Fibrum Team is working on a massive project called Desirium. It’s a single application which contains a lot of unique feelings and experiences. They fit every taste, whether it is a remarkable day of president life, a scary abandoned house or an exciting flight through the stars.

The story of the company began in 2013. Ilya Flaks assembled the team to realize the idea of virtual reality available for everybody. He presented the first VR-headset Fibrum Pro at the conference in Kazan, Russia in 2014. Now it can be acquired not only in Russia but also in Germany (Media Markt, Saturn, Gravis), Spain (Media Mark, Rossellimac) and East Europe (Alza). You also can find Fibrum Pro VR headset in Hong-Kong (HMV) and USA (Bluewire, Fry’s Electronics). We are also going to enter the markets of France, United Kingdom, Turkey, Finland, India, we are currently in negotiations.

Within two years the line of products has expanded significantly. Fibrum has released dozens of VR-apps, created the Fibrum Platform and developed the first in Russia VR shooter “The Raid”. The company has also produced AR greeting cards and coloring

books. There are about 30 successful business projects in collaboration with such organizations as Moscow Government, Ministry of Culture and Yandex.Taxi and others.

The development of innovative solutions and user-friendly products are the core principles of Fibrum Company. Fibrum team takes a careful and creative approach when writing scripts and scenarios for new games. Afterward, the team runs extensive graphic and dynamic tests in order to ensure that diving into the virtual reality will always be a pleasurable experience.

We want to make history more comprehensible and interesting. We find and collect thousands of war objects distributed among museums and private collections all over the globe in one place, creating high-quality 360⁰ panoramas, photos, and videos. Virtual reality technologies allow to walk around world’s museums without leaving home, find yourself in the thick of combat actions, drive a tank, and be in footsoldier’s shoes. The exhibition will show 360⁰ military reconstruction (The 2017 Steadfast Tin Soldier) with a role-playing opportunity (3 roles).

“Masterskaya” is a multiproduct holding and irreplaceable production partner of the major business events. Over 10 years, the company has been developing inspiring projects, providing a complex approach to the design and ultrafast printing of the proprietary manufacturing. Our team helps to bring brands to a qualitatively new level and make the event bright and impressive. Portfolio of works – www.mrmsk.com

Every day designers, engineers and programmers work together (atelier style) pursuing a culture of learning to imagine, through non-traditional approaches, the impact of emerging technologies on business life. Different experiences are combined together to unleash new creative energies and to rethink what already exists or to create​new functions and new use values, thus realizing innovation (of products, of processes and businesses), taking advantage of the opportunities that the digital technologies offer

We create innovation of product, of process and of business. Interactive 3D solutions, from simulation based safety training and learning to the creation of interactive 3D materials, improve communication and knowledge transfer and enable people to understand faster and decide better.